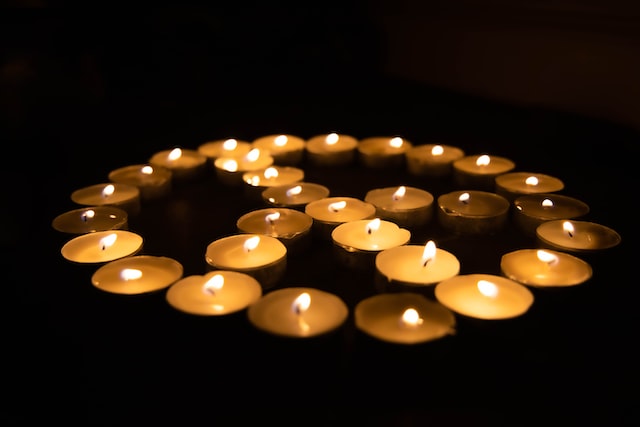 Fourteen short obituaries for the modern woman
(after Auguste White)

1. Kayal died while doing the eleventh dish because her heart couldn’t take the fact that her maid just called up in the morning and quit her job.

2. Just as she touched the feet of the musician whose music saved her life, Sahana dropped dead.

3. When asked what she’d do as a spirit, Preethi replied she’d reel-bomb Instagram celebrities and become viral.

4. Nisha is survived by her family of four cats and a locked storeroom full of unpublished poems.

5. Radha breathed her last as soon as she heard her misogynistic husband say, ‘I cleaned the house.’ The autopsy report revealed sudden shock as the cause of death.

6. Malar ate a few daffodils out of starvation and died chanting Wordsworth’s name.

7. According to her diary, Avanthika contemplated slackening her jaws and swallowing all her ghosts before passing away.

9. Lavanya will never be forgotten; her home cooking videos will be reshared a million times for many years to come.

10. Vaishnavi passed away peacefully with the expression of someone who had just gobbled a bowl of instant noodles in terrible hunger.

11. Bhavana would like to be remembered as the charming, lovable woman that she was, but not as someone who was fascinated with blue angel sea slugs and bismuths.

12. Anu was a bohemian forced into monotony. She wanted this to be particularly relayed to all her loved ones.

13. Just as she had run out of metaphors, Clara suffered a cardiac arrest and died with a poem stuck in her throat.

14. Hayathi died correcting the pronunciation of her name for the 5836th time.

If you are in love with my poems, please consider purchasing a copy of my poetry collection – La Douleur Exquise.

This site uses Akismet to reduce spam. Learn how your comment data is processed.

You can get the paperback or the Kindle version here: https://getbook.at/LaDouleurExquise

So, there's my #SpotifyWrapped

I hope @Spotify takes November and December into account from the next year.

'Writing is my passion. It fulfils me and lets me feel content. Earning from my writing makes me feel good but that's not the primary purpose of why I write. I'm a writer whether I earn from it or not. Are you doing something for yourself that doesn't involve monetary benefits?'

A "friend" told me that unless I earn a living from my books I can't call myself a writer. All witty replies evaded me as usual. What would you reply to that, #WritingCommunity?

it comes out of nowhere

pre menstrual sadness is one of the shittest feelings ever.

someone pay me for making playlists